In June 2013, Capcom announced it would be using Xbox SmartGlass in Dead Rising 3. Xbox SmartGlass is a companion application Xbox One available for Windows 8, Windows Phone, iOS, Android (version 4.0 and above) and Windows Server 2012. Smartglass is completely optional.[1] SmartGlass will support all operating systems.[2]

Nick Ramos stumbles upon a dead Zombie Defense and Control agent who was trying to evacuate from Los Perdidos. The dead agent has a PDA (palmtop computer) allowing the player to connect to Xbox Smartglass through the player's cell phone. Nick can hack into the government network and call in airstrikes.[4] 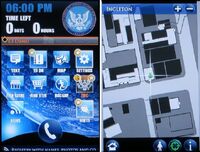 Retrieved from "https://deadrisingwiki.fandom.com/wiki/Xbox_Smartglass?oldid=248108"
Community content is available under CC-BY-SA unless otherwise noted.