The XML Prototype is a Dead Rising Special Forces armored tank used by Brock Mason in the end of Overtime Mode. Brock uses the tank to try and kill an escaping Frank and Isabela.

Once Frank is able to defeat the tank, the tank fires one last shot at Frank and Isabela, causing their car to flip over. From there on, Frank fights Brock in a hand-to-hand combat.

The tank has a range of attacks from firing 2-4 missiles to deploying Special Forces Drones. 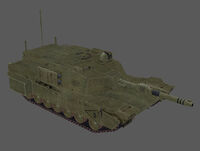 Model
Add a photo to this gallery

Retrieved from "https://deadrisingwiki.fandom.com/wiki/XM3_Prototype_Tank?oldid=238304"
Community content is available under CC-BY-SA unless otherwise noted.