The Underground is one of the Fortune City, Nevada locations in the game Dead Rising 2. The Underground, as its name implies, is the underground network of tunnels beneath the city that is inaccessible until Chuck progresses to Case 2-2: Ticket to Ride.

It is similar to the Maintenance Tunnels in Dead Rising's Willamette Parkview Mall, but made for trains instead of cars. Each plaza/casino in Fortune City has an access to the tunnels.

Stacey Forsythe notices several men moving heavy equipment in the Underground and sends Chuck to investigate, where he finds Tyrone King in charge of some hiest. He manages to catch up to the train as it escapes Chuck, who kills several of Tyrone's henchmen in the process. Before Chuck can apprehend Tyrone, the Terror is Reality producer uncouples the train, leaving Chuck behind.

Later, after the failed military rescue, Dwight Boykin and several soldiers evacuate to an area in the Underground. All but the sergeant are killed due to the zombies, leaving their bodies and burning Humvees to litter the Underground. Dwight has snapped due to the carnage and holds Rebecca Chang hostage, believing he is keeping her safe. Chuck manages to defeat Dwight and save Rebecca before Dwight commits suicide.

The tunnels are also home to an Underground Lab used by Phenotrans to extract Queens from zombies, staffed by Mark Bradson and Pearce Stephens, two researchers, and guarded by a number of armed mercenaries.

There are seven entrances to the underground. 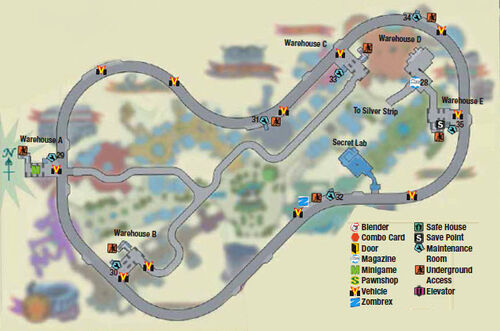 There are no Zombrex Posters in this area.

There are no Prestige Point load screen hints in this area.

Retrieved from "https://deadrisingwiki.fandom.com/wiki/Underground?oldid=236150"
Community content is available under CC-BY-SA unless otherwise noted.