The TIR Uniform is clothing found in Dead Rising 2. To unlock this requires five million dollars earned total through Ranked matches of Terror Is Reality Online. Only the yellow outfit is unlocked. This does not need to be all earned in one consecutive session, nor do you have to keep the money without cashing out. Simply earning five million dollars total will unlock this uniform. After it is unlocked the player can find it in the locker at the safe house restroom. 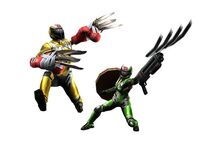 Add a photo to this gallery
Retrieved from "https://deadrisingwiki.fandom.com/wiki/TIR_Uniform?oldid=232027"
Community content is available under CC-BY-SA unless otherwise noted.