In items.txt found in the Dead Rising 2\data\datafile.big folder are around 165 different survivors and psychopaths. This file controls the actions and behavior of the survivors. See: Mod:Placing characters/list for a partial sortable list of survivor attributes.[1]

The collapsed list shows all the characters available to modify in dead rising 2.

An almost full list of entries is found at on this page A more detailed partial list Mod:Placing characters/list.

In game survivors are survivors which Chuck can interact with in the game,[2] whereas cinematic characters (below) are characters in the cutscenes.

Gibbed's is required to first unpack datafile.big to access the missions.txt. See the Gibbed's article for more information on how to unpack a file.

You need to open:

Add the character into a mission.

Now Lulu and Julius will appear in the Lush-ious Lady mission in the same room as Kristin.

Up to nine characters (not including Chuck) can be added to Fortune City at any one time. And while there can be more then nine characters in the city at once, missions will not spawn unless the total number of survivors is eight or less (Psychopaths and Rebecca do not count towards that limit)

With Cine (cinematic) characters there is an extra step to add them to the game.

Spawning the "Cine_xxxx" entries from items.txt alone will not work, because these cine characters do not have the necessary data.

Then edit the asset file name and title of this copied srv entry.

See the collapsed Copying and modifying an existing character to allow a cinematic character in the regular game below for an example.

These new entries will not have the correct names though, they will have the names or the survivor data you copied unless you alter the str_en.bcs file, see changing text.

In missions.txt you will use this new name to make the cinematic character appear, so to use the example from above:

Will spawn cine_pa_t1 the TiR Employee in the Americana Casino near where Lush-ious Lady appears. The TiR Employee is seen in the beginning cutscenes and is killed by a zombie in the Green Room with Katey.

This was created using the same format as above:

The crewman in items.txt has one of the most simple codings to place. This can be used for other character placements.

There are duplicate entries for many of the main characters, most of which will crash because they share coding.[Verification needed] In debug mode red warning text flashes across the screen, but the game does not crash.

The maximum number of notebook entries, when all ShowUpInNoteBook are changed from false to true is around 158.

Three identical entries of Stacey
Add a photo to this gallery

For a list of all character attributes in Dead Rising 2, see Mod:Placing characters/list.

List of attributes for characters found in Dead Rising 2\data\datafile.big\items.txt

If a survivor has a zombie variation, then they'll have another model with the "_zombie" extension.

If you zombify a character with no zombie model, then you will get a "missing prop" box instead.

the game text has the following lines:

If the zombie model is renamed with the regular models name in NPCs.big, a terribly distorted character results.

The textures of the zombies are the same as the survivors. Here the zombie survivor Walter's textures are shown.

Spawns Dick with a Machete.

Add the following in missions.txt in the mission with the character:

Survivors attack Chuck or rock out

Also in sgraph.txt they are listed in the section:

By changing the line "IdleChooser" you can control what the survivor or psychopath does if they do not have an animation behavior.

This line prevents a psychopath from having their arms out and slowly floating.

Hands out, every minute the survivor turns and paces before returning to original spot.

Occasionally idlechooser is overridden by the line "nature" which also effects the survivors idle state. Below is a picture of the 7 nature states with Camille. The 7 camilles are all placed in the same location, without any rotation, all of the rotation in the photo is controlled by the nature line. 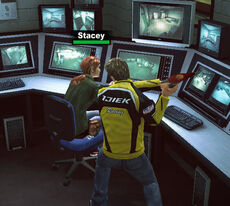 Add Height = "x" to a character in items.txt.

Height does not work for weapons, but works for the weapons that the character is carrying, such as Floyd's guitar (shown below).

If Chuck trades a weapon with a shrunk survivor, the item chuck gives to survivor shrinks, and the item the survivor gives to chuck enlarges.

Chuck can walk through a giant's legs, and the giant moves through other survivors and zombies.

Giant survivors are not effected by the ceilings, they go right through

There appears to be no limit size, heights up to 100 have been tested and worked.

Rescuing giant floyd, only the legs show in the safehouse.

There are other characters mentioned in the debug string, and also in the game text.[3]

Zombies group 2
Add a photo to this gallery 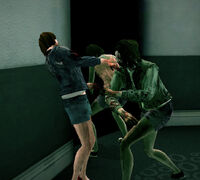 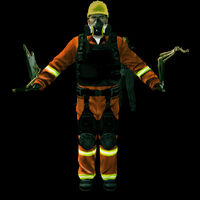 Grotesque boss_mercenary
Add a photo to this gallery 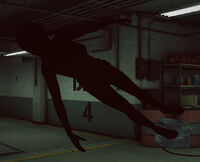 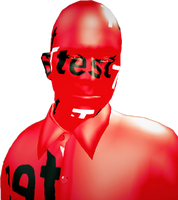