These instructions were made for Dead Rising 2 ONLY. They probably work for other games, but have not been tested.
Modify BCT files

A Dead Rising 2 PC player can edit the color and style of any object in the game. You can extract and modify the textures from the game. There are two ways to get these textures back into the game:

Example of how to modify a .tex file, changing the colors of Chuck's jacket. Instructions from Proboards.[1][2]

4. Open the newly created npcs_big folder and find the file chest_default.tex This .tex file controls the style and color of Chuck's jacket. We will be reskinning this file.

5. Copy and save chest_default.tex to another folder for two reasons:

a: as a backup in case there are problems,
b: to later open with a hex editor for coding header.

8. Select the file you want to convert, in this case chest_default.tex.

If creating an environmental textures the files quickbms will not automatically convert these files into .dds files. See Mod:Enviroment#How to reskin environment files

9. If you have Photoshop open the .dds and modify the skin, in this example we will be modifying cr_jacket_nm.dds.

10. Before you save the modified Photoshop .dds file, open Woody's Texture Viewer (WTV.EXE) and see if the original dds you are modifying is DXT5 or DXT1.

At the bottom left of the open Woody's Texture Viewer (WTV.EXE) it will have DXT5 or DXT1.

11. This is assuming you have the Nvidia plugin for Photoshop. If you have not downloaded and installed the Nvidia plugin, do it now. Then, in Photoshop, save the modified skin with the same DXT5 or DXT1 settings you determined with Woody's Texture Viewer.

12. After saving the modified dds file, check the .dds file size to see if it is the same. Do this for every .dds you reskin. If it is a significantly different size, you choose the wrong DXT1 or DXT5 file type.

13. Now with a hex editor such as UltraEdit:

17. Copy and replace the modified cr_jacket_nm into the new folder you extracted with Gibbed tools, replacing the original cr_jacket_nm.

18. With Gibbed's tools repack the new chest_default_tex folder you created

19. Cut and paste the newly created chest_default_tex.big file in the npsc_big folder.

20. Change the file to chest_default.tex, Changing the extension from .big to .tex.

21. With gibbeds repack npcs.big and place it back in data/model

Tip: If the skin looks more left or right inside the game you didn't copy & replace correct the header.

Select the .big or .tex file to convert

Select the folder where the extracted images will go

The script will run, unpacking all the .bct files and turning them into .dds files 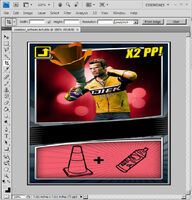 If you have the Nvida extension on Photoshop, you can open the file in Photoshop.
Add a photo to this gallery