A minigame is a short game which Chuck can play for money or prestige points. Most minigames that require a fee to play allow Chuck to win multiple times, such as the Casino Cup. If Chuck keeps paying to play these games the cost increases but so do the potential rewards. There are fifteen minigames in Fortune City, listed below.[1]

Make a hole in one in this minigame. Chuck has three chances to make the shot. Note that it makes no difference if Chuck sinks one ball or all three—Chuck won’t earn more for sinking them all.

A Virtual golf simulator can be found on the first floor, which can be played to earn cash prizes and an equal amount in prestige point bonuses.

The simulator consists of three rounds, each of which gives Chuck three shots (or 'drives') to hit a hole-in-one and win the round. The player has to start, and then stop, a rising meter on a 'sweet-spot', indicating the perfect drive to score a hole-in-one. With each round, the 'sweet-spot' gets smaller, until on the third round, the spot consists of only one point on the meter.

The simulator resets each time Chuck moves to another section of Fortune City, or after Chuck wins the Third Round.

Press the onscreen button to fill the meter on the right. When the meter fills to the indicated zone, quickly press the button a second time to swing. Chuck receives prestige points and cash for making a hole in one. The Casino Cup challenge level and costs increase as Chuck keeps playing, along with the prestige point rewards.[3]

In the PC game files items.txt, this minigame is called a GolfBooth

Aces are scored as either one point or 11, depending on which would be most beneficial to Chuck's hand. Kings, queens, and jacks are worth 10 points apiece. All other cards are scored at face value.

After placing Chuck's bet and being dealt his initial two cards, use the machine’s buttons to either:

If Chuck's first two cards don’t put him close to 21, Chuck has got to hit to have any chance of beating the dealer. If Chuck scored close to 21, such as a 19, stand to see if Chuck has beaten the dealer’s hand. Doubling down is risky—only do this when fairly certain that taking one more card will make Chuck's hand a winner.[1] 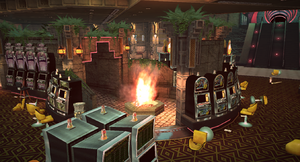 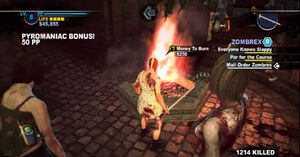 Chuck will get the Pyromaniac Bonus! and Stupidity Bonus! prestige point bonuses

In the PC game files items.txt, this minigame is called a FirePit (fire pit). 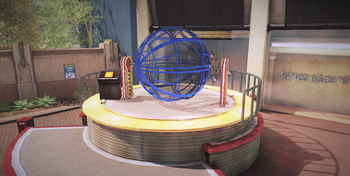 See Minigames/Gallery for more screenshots Motion madness is a mini-game located in Fortune Park. From Royal Flush Plaza exit to the park, and turn right. It is a giant Ramster Ball that Chuck enters. Follow the onscreen commands to roll the ball in various directions until the game ends. If Chuck wins, he receives prestige points

In the PC File items.txt this game is called Gyroscope. A gyroscope is a round device for measuring or maintaining orientation.

Pay the game’s low buy-in to draw a hand of five cards, which light up on the wall. After Chuck draws a hand, choose which cards Chuck should keep by standing in front of them and pressing the large buttons when the “hold” command appears. Hit the draw button on the far left a second time to swap out any cards Chuck didn’t hold onto for new ones. The goal is to make your best five-card poker hand.

The higher the hand you make after your second draw, the more cash Chuck will win. IHere are the best possible poker hands, from highest (most rare) to lowest (most common).

Keep in mind that the highest hands are extremely difficult to make—keep it simple and try for pairs for the best odds of making money.

Dead Rising 2: A father's daughter is happier when friendly stuffed toys are given.

In the PC file items.txt this game is called "ZoltarMachine" (Zoltar Machine). In the 1988 movie Big, Zoltar was the fortune machine which changed the boy into the adult Tom Hanks. 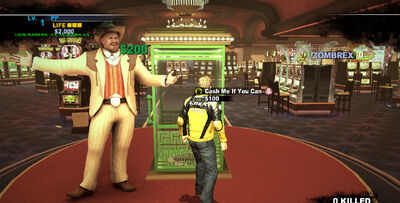 Retrieved from "https://deadrisingwiki.fandom.com/wiki/Minigames?oldid=229256"
Community content is available under CC-BY-SA unless otherwise noted.