The Mercenary Bike is a weapon and vehicle in Dead Rising 2. It respawns in the Underground Warehouse E, below the Palisades Mall. It is only available after Case 2-2: Ticket to Ride. Chuck knocks a mercenary of off the bike and then chases the train TK is on with this bike.

Despite its similar appearance to the motorbike, it cannot be modified in the Combo Bay (see video below).

Respawn location on the edge of warehouse E platform.

Mercenary attacking with bike before Chuck dismounts him. 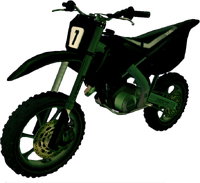 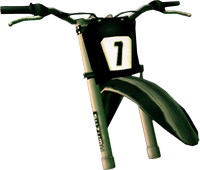 cine_superbike_frontforks_bk
Add a photo to this gallery

Retrieved from "https://deadrisingwiki.fandom.com/wiki/Mercenary_Bike?oldid=231344"
Community content is available under CC-BY-SA unless otherwise noted.