As Chuck rests in the locker room after his TIR match, the newscaster mentions the CURE rally that took place earlier in the day at the Fortune City Arena. McKenzie can be seen on the television protesting Terror is Reality along with Stacey Forsythe, Charlie, and Andrea Brenser.

It is unknown whether this man survived the outbreak as he is not seen anywhere after his appearance on the television newscast. 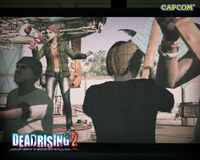 McKenzie as a zombie in game

Zombified version of McKenzie only seen in a mod

Retrieved from "https://deadrisingwiki.fandom.com/wiki/McKenzie?oldid=210536"
Community content is available under CC-BY-SA unless otherwise noted.