Landing on the mall roofEdit

Frank spots a Heliport on the rooftop of the Willamette Mall and asks the pilot Ed to drop him here and come back to get him in three days. Before the helicopter can touch down, three UH-60 Blackhawk helicopters appear and attempt to push the helicopter away from the mall. Ed gets close enough for Frank to jump out before flying off.[1]

Frank jumping from the helicopter onto the heliport

On the Heliport, Frank encounters Carlito for the first time, a mysterious man who is not very forthcoming with information.[1]

After speaking with Carlito, head through the gray doorway to Carlito's right and go down the stairs to the mall's Security Room.

The Security Room is comprised of a set of smaller rooms. For the duration of the game, this area is a safe house where Frank can return Survivors and get a temporary respite from the zombies in the mall. At the moment, all the secondary rooms are empty and devoid of any useful items.[3] 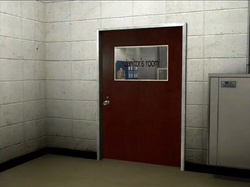 Walk through the red door at the end of the small hallway, which is labeled "Janitor's Room" on the glass.

Examine the surveillance monitor for a short cutscene.[4][5] 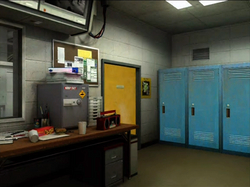 Then walk through the yellow security room door. 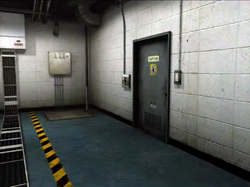 Walk through the door on the right marked "Staff Only." 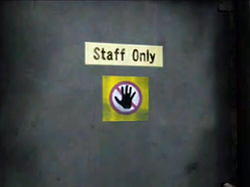 This door opens into a long hallway, which takes Frank out into the Entrance Plaza of the mall.[4]

Inside Entrance Plaza, there are more survivors barricading the front entrance to keep the zombies out. The leader of the group, an older man named Ryan LaRosa, informs Frank about the zombies and orders Frank to help by gathering large items for the barricade in the back.[6]

If Frank approaches each of the eleven survivors, he can listen in on their conversations.

Walk toward the back of the Entrance Plaza near the gate, where there is a pile of furniture for the barricade.

Before Frank picks anything up for the barricade, an old man on the other side of a shutter yells at Frank, but Frank doesn't have any time to respond as the crazy old woman opens the main doors to get to her dog, letting the zombies into the mall. A man shows up on the floor above and orders everyone to run and follow him to safety.

Further information: Weapons, which explains how to fight.

As soon as the cutscene ends, grab as many of the food and smaller one hand weapons that Frank can hold, and start running through the horde of undead to either staircase.

Return to the security roomEdit

Frank is introduced the main characters here, Otis Washington, Brad, and Jessie. The entrance plaza door is blow torched shut, and will not be reopened until 10am, September 22, the last two hours of 72 Hour Mode.[7]

Frank can save his game on the green couch, before leaving through the airduct to the rooftop.

Frank loses all his healthEdit

If Frank loses all his health in Entrance Plaza, he will awake in the security room on he couch.

Continue to the next article in the walk through, Introduction (Love Lasts A Lifetime).

When the zombie breach occurs, Kathy will slowly stumble to the stairs with Alan following her. Alan and Kathy can get up the stairs past the zombies, but their profiles will still show dead when Frank returns to the security room.

Table of Contents
Retrieved from "https://deadrisingwiki.fandom.com/wiki/Introduction_(Entrance_Plaza)?oldid=238320"
Community content is available under CC-BY-SA unless otherwise noted.