Dead Rising weapons did not change their appearance after being used to kill a zombie.

Clothing in Dead Rising 2 is named. In Dead Rising there was no name for the clothing, leading to speculation about names for clothing. 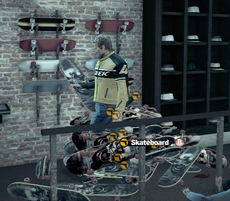 Chuck is able to grab infinite items off the store rack easier. Instead of picking up the item on the ground as Frank did in Dead Rising, Chuck continues to grab the infinite supply of items from the rack, which very quickly creates a pile of items.

Retrieved from "https://deadrisingwiki.fandom.com/wiki/Dead_Rising_2_differences?oldid=237264"
Community content is available under CC-BY-SA unless otherwise noted.