There is also a detailed Still Creek Map.

This is a walthrough for Dead Rising 2: Case Zero. Between Dead Rising and Dead Rising 2, Chuck Greene flees Vegas with his daughter Katey. In need of fuel and looking to stock up on supplies, Chuck and Katey stopped at the small desert town of Still Creek, shortly after their arrival a containment zone is breached and the undead begin to shuffle into town.

Then someone steals Chuck’s truck. With Katey needing a shot of Zombrex very soon, Chuck searches Still Creek for the drug, and a way out of town.[1] 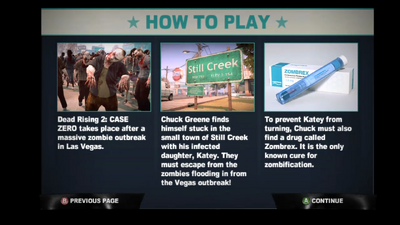 Chuck Greene finds himself stuck in the small town of Still Creek with his infected daughter, Katey. They must escape from the zombies flooding in from the Vegas outbreak!

To prevent Katey from turning, Chuck must also find a drug called Zombrex. It is the only known cure for zombification. 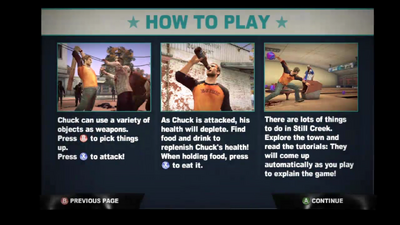 Chuck can use a variety of objects as weapons. Press

to pick things up.

As Chuck is attacked, his health will deplete. Find food and drink to replenish Chuck's health! When holding food, press & to eat it.

There are lots of things to do in Still Creek. Explore the town and read the tutorials: They will come up automatically as you play to explain the game!

After the Introduction, and two screens explaining Zombrex,[3] Chuck will begin the game in the Brockett Gas Station. The Brockett Gas Station is a safe house where the game can be saved, where Chuck can escort survivors too, and create combo weapons with the maintenance bench. Katey will wait here the entire game. There are several weapons in this room.

Chuck has the opportunity to make a Combo Weapon immediately. As the game starts, in front of Chuck is a door. To the left of the door is a Box of Nails and a Baseball Bat.

Pick up both the Box of Nails and the Baseball Bat.

Walk to the brown maintenance bench. A yellow action icon with a hand will appear prompting Chuck to "Place Item". Press the

button to place the first item on the bench. An explanation screen will appear, explaining how maintenance benches work. A blue wrench action icon will then appear, prompting Chuck to combine. Press

Another cutscene will begin, showing that Chuck has made his very first combo weapon, a Spiked Bat, and explaining what a combo weapon is.

Adjacent rooms in the Safe HouseEdit

In the adjacent room is the main entry where Chuck pushed the vending machine across to stop the zombies. This room has Orange Juice (to the left on the garage door) and Snacks. Pick up at least one orange juice.

Roof of the Safe HouseEdit

On the roof is a sniper rifle near the front of the store. The roof is reached by a ladder behind the main entrance room counter.

After creating the Spiked Bat and picking up at least one orange juice, exit the garage. The exit Chuck will use is in the garage Katey is in, next to the maintenance bench. The door exits into a car scrap yard, turn left and walk around the derelict cars.

There is a small blue shack at the edge of the Auto Scrap Yard. Enter this shack. A Explanation screen appears explaining saving.

Switch Chuck to a weapon (using

The other door is to Still Creek. Open the door.[5]

In searching for Zombrex Chuck must travel across this small town to the Quarantine Zone. Turn right, following the guide arrow at the top of the screen. This will take Chuck past the center of town.

As this case begins an information screen appears which states:

Traveling through the quarantine zoneEdit

To avoid zombies, Chuck can jump from car to car in the traffic jam.

Jump down and head towards the brown tents and ambulance. The ambulance is on the left.

Open the ambulance door and a cutscene begins.

After the information screen, the case begins with Chuck behind a utility cart. Push

to begin pushing the cart. Follow the guide arrow, backtracking back to the gas station.

As Chuck pushes the cart near the door to the safe house shed, the brief full black load screen starts, and a cutscene begins. For text and screenshots of the cutscene see Case 0-3.

As soon as the cutscene with Katey ends, the Case File screen appears, showing that Case 0-4 is Engaged. It further explains that:

The game again asks if you want to save your game. Select yes.

Preparing to return to Still CreekEdit

After the Bike Parts screen, Chuck starts in the garage. You can now look at the Bike Screen on the pause menu to see the parts needed to finish the bike.

Create another Spiked Bat if needed and pick up another Orange Juice in the store.

As Chuck leaves the Gas Station Safe House, there is a queen cutscene. The queen acts the same as queens in Dead Rising, the queen violently kills all nearby zombies when it is killed.

After the cutscene, a survivor, Dick Jones, is trapped on top of a van, surrounded by zombies.

After most of the zombies are killed, jump on top the van and speak to Dick.

Follow Dick Jones to the pawnshop and speak to himEdit

There are 8 items for sale in the Still Creek Pawnshop. Chuck should buy the wheel now. If Chuck does not yet have enough money to buy the wheel, see the next section below.

If you want to complete the game and rescue all survivors, Save money and only buy the wheel then the Zombrex.

Not enough money to buy the wheelEdit

Chuck begins the game with $2000. If Chuck does not have enough money to purchase the $5,000 wheel yet, walk across the street to the Still Creek Casino.

Outside the casino doors is $300 on the ground.

Chuck can acquire around $10,200 every trip into Still Creek Casino, which is the fastest way to make money.

Play the Barnyard Bonanza clusters 5 times each (each play costs $100) for 5 guaranteed wins (pays out $300; total net gain of $1000 per cluster). This does not work on the Trouble With Turkeys slot machines, and Chuck will lose your money if he plays them.

Purchase the wheel and return to the safe houseEdit

After purchasing the wheel return to the safe house. On the way Chuck can pickup the gas canister which is just outside of Brockett Gas Station.

You can check the bike part screen to see Chuck's progress thus far.

Sub-case name: Treasure in the Alley

Travel through the concession stand.

Travel through the movie theater itself.

On the right side is a door. When Chuck opens the door he unlocks it, satisfying one portion of the Lockmith achievement.

Turn to the right.

Half way down the alley way is the engine. Pick it up and return to the Brockett Gas Station safe house. Remember that all items except for the gas canister must be carried with two hands, and Chuck drops the item if he attempts to switch to another item in his inventory.

Sub-case name: Treasure in the Alley.

The bike forks are acquired in a small shed on the south side of two between the Quarantine Zone and Big Buck Hardware, next to the ugly tire monument.

But first, the key must be taken from the second floor of Still Creek Hotel.

Travel to the Still Creek HotelEdit

The shed key is found in the Still Creek Hotel.

After returning the engine travel past the gas station safe house.

At the building with Bob Blackrock sniping, turn left, there is a alley way behind this building.

Travel past the green dumpster on the right.

Travel to a fire escape, and jump up on it.

Inside the Still Creek HotelEdit

Inside the hotel, turn left.

Walk past the two rooms

Walk past the boarded up stairway going downstairs.

At the end of the hallway is a room on the right.

Walk into this room. In the corner is the shed key.

Travel back through the hotel and exit the hotel.

Travel to the shed. Again, the small shed on the south side of two between the Quarantine Zone and Big Buck Hardware, next to the ugly tire monument.

Open the door to the shed.

Pick up the bike forks.

Travel to the second floor of the hotel and jump out of one of the windows in the hall leading to room with the shack key.

Kill Jason for the handle barsEdit

Trading the broadsword for the handle barsEdit

Travel to this parking lot.

In the parking lot is Archie Eaton and Jason Wong.

Speaking to Archie gets Chuck nowhere. Archie continues to say:

Chuck now has the handlebars.

Giving Chuck a bonus of 1,500 prestige points each.

Taking the broadsword from JasonEdit

Complete the escort and deliver the handle barsEdit

The load screen will start, followed by a cutscene.

Jason will exclaim: "I can't believe it! Chuck Greene is here in Still Creek. Thanks, dude!"

Travel back to the garage to the motorbike. When the yellow hand appears with the text "Examine" press

. The handle bar will appear next to the bike.

Chuck must bring Zombrex to Katey. If Chuck gave the Zombrex found in the ambulance in Case 0-2: Find Zombrex to Sharon he must purchase more Zombrex from Dick Jones at the Still Creek Pawnshop for $25,000.

Travel to the Still Creek Pawnshop.

Enter the pawnshop. The Zombrex is to the right of Dick Jones.

After buying the Zombrex, it will drop in front of Dick.

Pick up the Zombrex[7]

After collecting the zombrex Chuck needs to stock up on firepower for The Mechanic case. Visit Bob's Fish 'n Hunt and pick up an assault rifle, broadsword and shotgun. Return to the Brockett Gas Station safe house.

Heal yourself if necessary with orange juice from the next room and pick an extra carton. As Chuck approaches Katey the yellow action icon will appear with the text "Give Zombrex". Press

For the cutscene in which Chuck gives Katey Zombrex, see Zombrex 1.

To beat the mechanic:

Chuck should keep his distance and use the sniper rifle first then the assault rifle. Restock on orange juice if needed.

Retrieved from "https://deadrisingwiki.fandom.com/wiki/Dead_Rising_2:_Case_Zero_Walkthrough?oldid=229441"
Community content is available under CC-BY-SA unless otherwise noted.