Dead Rising (デッドライジング, Deddo Raijingu?) is an action-adventure, survivor horror video game, developed by Capcom and produced by Keiji Inafune. It was released on August 8, 2006 exclusively for the Xbox 360 video game console. The game was a commercial success. It has been introduced into the Xbox 360 "Platinum Hits" lineup, and a cell phone spin-off has been released. A sequel, Dead Rising 2, was developed by Blue Castle Games alongside many of the previous developers of Dead Rising, and was released in September 2010.

Dead Rising's story centers on Frank West, a photojournalist who ends up trapped in a shopping mall in the fictional town of Willamette, Colorado, that is infested with zombies. Frank must defend himself from zombie attacks, rescue survivors, contend with crazed psychopaths, and stay alive while still attempting to uncover the truth behind the incident. The player controls Frank as he explores the mall, using any available object as a weapon. The player can complete several main and optional missions to earn Prestige Points (PP) and gain special abilities. The game is designed as a sandbox game and features several endings, depending on the decisions the player makes along the way. A Wii remake was released in February 2009 titled Dead Rising: Chop Till You Drop, and a mobile phone version is also available. A sequel, Dead Rising 2 was published in September 2010

Dead Rising earned generally positive reviews upon release. All the reviewers commended the game's "sandbox" style mall to explore and the sheer amount of ways to kill the thousands of zombies. Most reviewers also agreed the save system, as well as the survivors' AI, detracted from the game's overall quality.

IGN stated the game needed "a better save system, more intelligent NPCs, a more forgiving story progression, and tighter controls," but still called Dead Rising "one of the more unique and entertaining titles on the Xbox 360." GameSpot said, "It's zombie action for people who want zombie action, and it's simply a great piece of entertainment."

A point of contention was the operation of the game's transceiver, specifically how persistent it is when ringing, and how vulnerable Frank is while answering any calls on it. While using the transceiver, Frank is unable to jump, attack, switch weapons, or pick up or use any item. Furthermore, if the telephone call is somehow interrupted (such as being attacked), the call will end abruptly, only for the transceiver to ring a few seconds later. If Frank answers, Otis will scold the player for being rude, then start the previous call over from the very beginning. Numerous gamer-oriented webcomics and blogs parodied the use of the transceiver within Dead Rising.

Main article: Chop Till You Drop

Dead Rising 2 (デッドライジング 2, Deddo Raijingu 2?) is an action-adventure horror-comedy video game, developed by Capcom in partnership with Blue Castle Games, and was distributed by Capcom. It was released on September 24, 2010 for the PlayStation 3 and Xbox 360 and September 28, 2010 for Microsoft Windows. The Dead Rising staff returned to create the game, including Keiji Inafune. As of February 2, 2011, Capcom has stated that the title has sold more than 2.2 million copies worldwide.

Dead Rising 2 has been met with generally positive reviews. The Xbox 360 version of the game received a rating of 79 by the review compiler Metacritic.

IGN, Eurogamer, and GamesRadar have given the game an 8 out of 10, praising the story, combat, and huge numbers of enemies on screen, while complaining about long loading times. GameZone gave the Xbox 360 version of the game a 6 out of 10, stating, "the lackluster presentation, uninspired story, outright broken multiplayer, and atrocious amount of glitches makes Dead Rising 2 less of a flawed gem and more of a somewhat polished pile that incrementally smells worse the longer you let it sit in your disc drive." Game Informer gave the game a 9.5 out of 10, stating, "Even after playing for dozens of hours, you'll still find new things in Dead Rising 2. I won't spoil anything, but there's a lot of variety to be found in the game beyond obvious things like the number of objects that can be used as bludgeons. This game is designed for multiple playthroughs, and I'm looking forward to each and every one of them." Ben Croshaw listed Dead Rising 2 in second place in his Top 5 games of 2010.

At Captivate 2011, Capcom's annual press show, the company announced that it was releasing Dead Rising 2: Off the Record, as a reinterpretation of the game with Frank West from the original Dead Rising as the main character. The game was released for the same consoles on October 11 in North America, October 13 in Japan, and October 14 in Europe for a discount retail price.

Off the Record is intended as a complete reimagining of Dead Rising 2, with new missions, cutscenes, environments, enemies, and weapons. The photography mechanic from the first Dead Rising is also included. There are technical and system upgrades, such as optimization of loading times and improved network performance. Off the Record also features a new sandbox mode. This allows players to explore Fortune City without the obstacle of time.

Off The Record received generally positive reviews, with a score of 73 and 72 on Metacritic for the Xbox 360 and PlayStation 3 respectively. Gametrailers gave the game an overall rating of 8.2 out of 10.GameSpot gave the title a 7 out of 10 rating, praising the core game but criticizing the lack of improvements and the sandbox mode's perceived lack of depth. Game Informer, by contrast, gave the game a 9.5/10 (the same score as the original) saying that "Frank's photography adds another layer to the already deep gameplay," and that "by itself, the sandbox mode is an incentive to buy Dead Rising 2." 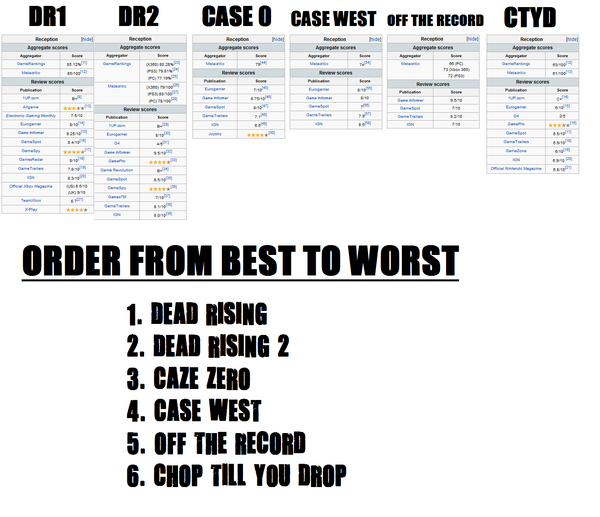 Retrieved from "https://deadrisingwiki.fandom.com/wiki/Dead_Rising_(series)?oldid=229438"
Community content is available under CC-BY-SA unless otherwise noted.