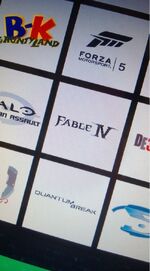 This article covers speculation which was later shown to be false.

De3D Rising was a speculated way in which Capcom refers to Dead Rising 3 in the June 2013 E3 conference.[1] It was shown to be a false rumor.

Retrieved from "https://deadrisingwiki.fandom.com/wiki/De3d_Rising?oldid=233804"
Community content is available under CC-BY-SA unless otherwise noted.