Template:Speculation Zhi is a psychopath in Dead Rising 3. He is a Buddhist monk found in the Zen Gardens in the mission Investigate the Zen Gardens.[1]

Zhi first notices Nick and 'welcomes' him to his garden. He says that since the outbreak has slaughtered his happiness, he must also slaughter. Nick says he has no right to kill innocent people. A zombie bumps into a gong and Zhi jumps down and throws a small bomb at Nick.

During the zombie outbreak, Zhi continues to maintain his garden and kills anyone that steps inside the temple. Zhi fights Nick using something that looks like a Guan Dao.[2][3] 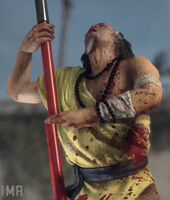 Zhi
Add a photo to this gallery

Retrieved from "https://deadrisingwiki.fandom.com/wiki/DRW_Zhi?oldid=243388"
Community content is available under CC-BY-SA unless otherwise noted.