Snowflake Boss Battle is an unannounced mission in Dead Rising 2 and Dead Rising 2: Off the Record. It is available in the first day, and will start when Chuck enters the Yucatan Casino.

After the zombie outbreak, Ted devotes himself to feeding "fresh meat" to Snowflake, one of the Yucatan's Bengal tigers. Ted is a "slightly "slow" caretaker" who hates people, but loves animals. Ted will do anything to find food for Snowflake and plans on feeding Chuck to the tiger. Mocked his whole life because of his weight and low intelligence, he considers the tigers he trains to be his only friends, and becomes extremely angry if he believes someone is making fun of him.

As Chuck enters the Yucatan Casino he will spot a survivor named Lenny Mooney, however the man quickly runs away while Ted brands Chuck as "fresh meat" and knocks him unconscious. He will then drag Chuck to Snowflake. Chuck tells him that he will find fresh meat for Snowflake and tries to calm him down. He tells him to take it "Nice and slow", which Ted interprets as being called "slow". He then gets angry and tells Snowflake to attack, prompting a fight. After he is defeated, Ted will crawl to a statue and then calls out to Snowflake to eat him, then succumbs to his wounds.

Defeating Snowflake can be difficult, but is far from impossible. Generally, quick weapons with repetitive strikes, or heavy weapons with single strikes are the best method. Her tactics are easily discernible, and because she only targets Chuck and zombies, most of the time, survivors are not as vulnerable as in other boss battles. Her most visible attack is a lunge, which is preceded by her running away from Chuck. Dodge-rolling, or running in a sharp angle can avoid this, opening her up for attacks. Her other attack is a quick trot towards Chuck, before leaping and clawing. Be aware that if she successfully lunges upon Chuck, she will proceed to maul him for additional damage.

If Chuck needs food during the battle, run to Baron Von Brathaus restaurant, which has several kinds of food and a blender. Chuck can mix two wines to create Quick Step. The magazine Health 2 is also found here, which when held, restores health by 100%.

In order to Tame Snowflake, Chuck must boost her health back to full with three steaks.

She will eat steaks thrown at her at anytime, including before she attacks. The easiest way to get her to eat all three pieces is to clear the area just outside her pen of zombies, then throw as many pieces of steak as Chuck can find down onto the floor so they are clearly visible against the white tile. As Snowflake prowls, she will eventually stumble upon the steaks and eat them, regaining her health. There is a power up sound when Snowflake eats a steak, similar to when Chuck eats food. Chuck occasionally needs to attract the tiger's attention, or she will wander off and kill zombies.

While attempting to tame Snowflake, zombies can interrupt her eating. Try to use ranged weapons to keep them off of her while she eats her meal. Another perfect distraction against the zombies is to create a Heliblade that turns the zombies attention to the Heliblade instead of Chuck and Snowflake, leaving her alone while she quickly eats her steak.

If Chuck needs food during the battle, run to Baron Von Brathaus restaurant, which has several kinds of food and a blender. Chuck can mix two wines to create Quick Step.

The magazine Health 2 is also found here, which when held, restores health by 100%.

After Snowflake eats all three steaks, a cutscene will play, and she will join Chuck.

After running away from Chuck and Ted, Lenny Mooney is hiding in the Yucatan Casino's VIP room. Lenny refuses to join Chuck until Snowflake has been killed or tamed. Once snowflake is killed, Lenny will show Chuck how to turn on the power to Yucatan Casino.

Dialogue of the mission in the Off the Record game files. All text may not be actually used in the final game. 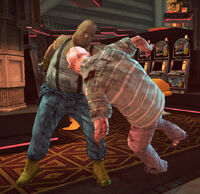 Meat in habitat
Add a photo to this gallery

Retrieved from "https://deadrisingwiki.fandom.com/wiki/DRW_Snowflake_Boss_Battle?oldid=242888"
Community content is available under CC-BY-SA unless otherwise noted.