In Dead Rising 2, Overtime takes place after the events of the 72 Hour Mode. This is unlocked if Chuck gives Tyrone King a dose of Zombrex after he is infected when the zombies invade the Safe House and completes all cases. This mode is an extension, adding approximately another day in which Chuck must collect several items in Fortune City. Completion in Overtime Mode results in Ending S.

Unlike Dead Rising, it is named just "Overtime" and is not selected from the main menu as a separate mode, taking place after the credits.

Inside the Safe House, Chuck sits clueless as to what to do next. He picks up a transmission from TK, who reveals he has taken Katey and Stacey hostage, and threatens Chuck into acquiring a variety of insignificant items, while he watches for his amusement. After collecting the items, TK directs Chuck to the Fortune City Arena, but when he arrives, TK stuns him with a tazer, sending him unconscious.

When Chuck comes to, he discovers he is dangling from a rope upside down above the arena, which is swarming with zombies. Katey and Stacey are also tied to each other, and in the same dire situation next to him. As TK gloats in victory, Chuck turns the tables and frees himself, climbing up the rope to the central platform. Chuck frantically operates the lever to bring Stacey and Katey back up, but TK jumps him, initiating a final stand off between them.

In a hand-to-hand fight, they end up grappling against the railings on the edge of the platform. TK mumbles his signature phrase "You gotta be willing...to risk it all...if you're ever really gonna-" before Chuck throws the insane TiR host from the platform to his presumed death, completing the phrase with "win big."

At last, Chuck lifts Katey and Stacey to safety. Katey offers out her hand to Stacey, and the three of them leave the arena. The camera zooms in on the arena, and a zombie jumps in front of the camera and screams loudly at the player for one last scare.

Time is limited as indicated by the mission gauges. Failure to obtain the items and reach the arena in time will result in game over, and a cutscene will play showing TK lowering Katey and Stacey into the zombies while laughing hysterically.

TK can be a hard enemy, as Chuck (initially) has no weapons, while TK's Microphone doubles as a mace, and when Chuck is in an elevated area TK will pull out a handgun that fires at a high speed rate. He also has a powerful charging attack, which pins Chuck to a railing for a beating - a series of quicktime events are necessary to break out of the beating. A good way to avoid it is to have him chase you around the perimeter of the crank support beams, which means he has trouble making a beeline for you. At random intervals or when he has taken a certain amount of damage, he will leave the area for about twelve seconds by vaulting over the railing.

The area consists of three doughnut-shaped platforms separated by climbable walls. The outer platforms have pyros which TK will activate to hurt Chuck if he stands on them. At the center of the middle platform is a crank where Chuck can attempt to pull Stacey Forsythe and Katey Greene higher to extend the time limit of the fight. TK will attack Chuck if he attempts this while he is on the platform.

Do not attempt to avoid TK on the upper platforms. He might not be able reach Chuck, but he is armed with a Automatic handgun/Uzi and will shoot Chuck if he remains out of reach for too long.

A Moose Head is on the right (when facing the crank) platform, and three Spot Lights and a Power Drill atop the wall between the center and left platforms. On the center platform there are five Cardboard Boxes and an Orange Juice. The boxes have been known to contain Orange Juice, Snacks, Dynamite and Crowbars. On the left platform there is another Orange Juice, some boxes, a Lead Pipe and a Donut, a Cement Saw with multiple Saw Blades scattered around, as well as a Large Wrench.

Hand-to-hand combat is possible, though only recommended for players comfortable with unarmed combat. The Front Kick will stun TK for several seconds, and the Double Drop Kick for about twice as long. Chuck can hit TK with up to 8 punches before he must "roll" to dodge. The roll technique should also be used to avoid his charge attack.

Using the Moose Head is not recommended, as Chuck will drop it whenever he takes a hit. Finding a crowbar in one of the cardboard boxes improves Chuck's chances greatly. The Flood Lights are potent weapons, but the power drill is especially effective - its combination of speed and power will deliver enough damage to stagger TK, permitting further attacks. It is possible to defeat TK using the drill without ever touching the crank, instead using the times where TK jumps the railing to stomp cardboard boxes and/or eat snacks to heal.

In co-op, have one player gather food and weapons while the other keeps TK busy, then drop the items in the middle area and taking turns healing and attacking. Only turn the crank when he jumps over the railing, as he will ignore the other player if one starts turning it.

While Chuck loses all the items he was carrying before you enter the arena, you will still be under the effect of any juices Chuck took just before entering. Quickstep will make gathering items simple, and Energizer (invincibility) and Painkiller (half damage) can be useful at the beginning of the fight, but Spitfire has too short a range to be an effective weapon.

If Chuck is using Skill Packs, the psycho outfit is recommended, as it will drastically strengthen Chuck's attacks with the Large Wrench and Crowbar. 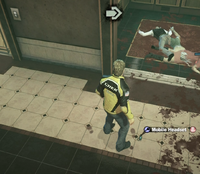 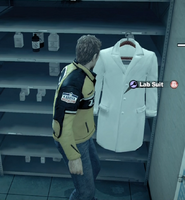 USB Drive
Add a photo to this gallery

Retrieved from "https://deadrisingwiki.fandom.com/wiki/DRW_Overtime?oldid=242382"
Community content is available under CC-BY-SA unless otherwise noted.