Although absent from Dead Rising and Case West, money makes an appearance in every other entry in the series.

Dead Rising: Chop Till You DropEdit

Money was first introduced in the Dead Rising: Chop Till You Drop Wii game. A new icon is introduced to the game the moneybag.

The money was used to purchase firearms, item stock, and books from Cletus Samson in the Huntin' Shack. Frank could also sell firearms to Cletus in this shop.[3]

In Dead Rising 2: Case Zero money was essential to completing the game. The player was introduced to a Pawn Shop where Chuck had to buy a Wheel to complete the game successfully.

This is a list of all ways to make money:

Money is used in the four pawnshops to purchase weapons, Zombrex, vehicle keys, and the Knight Boots. Chuck must also pay a survivor to join him in Know When to Fold 'Em and other missions.

There is a glitch than can be exploited via co-op which enables players to receive money at pawn shops rather than spending it.

It involves the duplication of the Bargaining magazines until there are at least eleven of them in one game (as such, if the player wishes to gain money, they must first level up enough to have at least eleven inventory slots available).

To duplicate, one player must gather both Bargaining magazines and bring them into a hosting player's game. This is best done with someone you know who is willing to cooperate. It's also advisable for the joining player to save after gathering the magazines, otherwise they'll have to be got again.

For example, with twelve magazines in one's inventory, 120% will be deducted from the price of any item. The SUV key (the most expensive item) for instance has a standing cost of $2,000,000. With ten magazines, 100% of the price is reduced, making the item free. But above 100% will cause the reverse effect and money will be gained.

If the player continuously buys the SUV key over and over, receiving $400,000 profit each time, it's possible to amass millions in minutes.

Tutorial screen in Off the Record 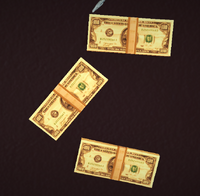 Retrieved from "https://deadrisingwiki.fandom.com/wiki/DRW_Money?oldid=242269"
Community content is available under CC-BY-SA unless otherwise noted.