Clay Hurlton is a talent agent introduced in Dead Rising: Road to Fortune (issue #1). Frank West and Tyrone King are among his clients.

After hearing Rebecca Chang's radio report on the Nevada breakouts, Frank calls Clay to set up an interview with her. However, Hurlton gives Frank the bad news that Uncovered's ratings have dropped so low that the show is being cancelled immediately in favor of more "real reality" programming. Hurlton adds insult to injury by suggesting Frank go back to doing commercial work. This is the incident which inspires Frank to contact Rebecca Chang and investigate these new outbreaks himself.[1]

Frank inadvertently names the show that will replace him: During Frank's angry telephone rant, he yells, "You wanna know what real reality is, you smug sonuvabitch?! Terror is reality that's what! Fuck You." and hangs up. Hurlton immediately calls TK to tell him of his "kick-ass idea for a new show."[2]

At the Las Vegas 250, high above the crowd, Clay Hurlton observes the scene from a private skybox while chatting with TK on the phone. TK, just reaching Las Vegas city-limits in a limousine with Amber and Crystal Bailey, confirms that he is on his way. Inspired by the race, Hurlton tells TK of his latest idea to add motorcycles to their new "Terror Is Reality" show concept, which TK likes.

After the race has started Hurlton calls TK again asking what's holding him up. TK claims he had to pull over for a "pit stop". Hulton watches in horror as the zombie virus sweeps through the crowd below. He describes the scene to TK who immediately orders his driver, Jerome to hightail it away of Fortune City. A zombie wearing a leather jacket manages to get into the skybox and rips out Hurlton's throat, killing him. 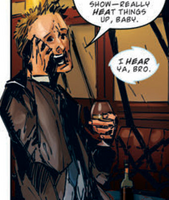 Hurlton killed by zombie
Add a photo to this gallery

Retrieved from "https://deadrisingwiki.fandom.com/wiki/Clay_Hurlton?oldid=229370"
Community content is available under CC-BY-SA unless otherwise noted.